A solo RPG journal game script that uses the Epistolary solo RPG system (which can be located here).

This game takes place in a setting in the near future, a period of time that has just moved past the last climate rumblings that destabilized humanity for a horrific moment, just enough to convince everyone remaining of the necessity to nurture the Earth for our own sake, at the very least. Our attention has been focused on cooperation, instead of mindless growth. Humanity is scattered now, and entire continents worth of humans have had to reshuffle and organize themselves and their loved ones onto an old Earth, into old re-imagined cities, and new communities. The people of this age are tired of hunger, war, and disaster—virtually everyone’s efforts are directed toward the survival and nurturing of the remaining people on Earth. It’s hard to be anything but cooperative during these times, in the wake of humanity seeing the devastating consequences of living detached from one another. Empathetic and compassionate communities have risen from the ashes--from the floods, from the wreckage of storms, earthquakes, and heat--of a chaotic planet. Technological advances, cooperation, and trauma bonding have pushed those left on Earth towards a path of rebuilding and healing the remains of a broken planet.

One celebrated project that has been carried out by workers, volunteers, and community organizations in the Democratic Workers Syndicate of the Americas (also known as DWSA) was the establishment of the Sun Fleet. The Sun fleet was initially a proposal to the DWSA congress, meant as a long-term eco-project that focused on solving issues that plagued the world’s oceans–namely overfishing, coastal erosion, and ocean pollution. The fleet, over time, became known as a collection of expansive and autonomous seafaring communities that dealt with floating sea gardens, as well as the maintenance and stewardship of established floating solar farms, artificial reefs, and sustainable fisheries.

The last climate rumblings left the world’s oceans in peril, and communities along the globe’s coasts were the first to experience the damage. Once the situation on land was able to be tempered, attention shifted towards the sea after the early and chaotic years of re-organizing society for those living within the DWSA’s sphere of influence. Amateur as well as professional sailors, fishers, and environmentalists formed the core of the initial crews of the Sun Fleet. Communities and individuals that wanted to live in, work with or enjoy the sea flocked toward the establishment of the naval project, and many would come to join the fleet. Sometimes temporarily, sometimes becoming permanent members of the Sun Fleet. Like many other public cooperative projects that were established by those living within the DWSA, the formal creation of the Sun Fleet was the result of various sections of society collaborating with one another and establishing cooperative contracts with one another and with the DWSA itself, in an effort to improve vital ecosystems that everyone depended on.

Most of the current and active members of the Sun Fleet consist of permanent residents that live in the fleet’s variety of ships. The ships vary, although most are sailboats–the rest include several shipping barges, a score of repurposed yachts, and a handful of other solar-powered seacrafts. All of these ships are distributed along the Americas’ western coasts, divided into smaller fleets, and tasked with specific responsibilities, which include: building and maintaining floating farms of sunglass solar panels; building and maintaining artificial reefs, for the purposes of supporting fisheries and dealing with coastal erosion, among other uses; as well as for the maintenance, support, harvesting, and processing of floating aquaponic farms. Agricultural technicians are tasked with working the floating farms, while sunglass technicians are tasked with the upkeep of sunglass solar farms and environmental technicians are usually kept busy with the maintenance of reefs and fisheries. Other positions in the Sun Fleet include communications operators, navigators, and quartermasters. 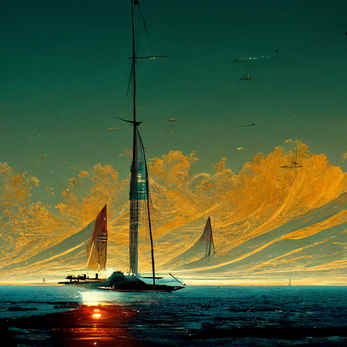 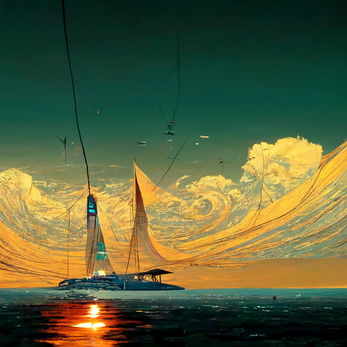