A solo RPG journal game script that uses the Epistolary solo RPG system (which can be located here).

This game takes place in a setting in the near future, a period of time that has just moved past the last climate rumblings that destabilized humanity for a horrific moment, just enough to convince everyone remaining of the necessity to nurture the Earth for our own sake, at the very least. Our attention has been focused on cooperation, instead of mindless growth. Humanity is scattered now, and entire continents worth of humans have had to reshuffle and organize themselves and their loved ones onto an old Earth, into old re-imagined cities, and new communities. The people of this age are tired of hunger, war, and disaster—virtually everyone’s efforts are directed toward the survival and nurturing of the remaining people on Earth. It’s hard to be anything but cooperative during these times, in the wake of humanity seeing the devastating consequences of living detached from one another. Empathetic and compassionate communities have risen from the ashes--from the floods, from the wreckage of storms, earthquakes, and heat--of a chaotic planet. Technological advances, cooperation, and trauma bonding have pushed those left on Earth towards a path of rebuilding and healing the remains of a broken planet.

Humanity, now scattered thinly across the globe, has come to rely on contracted groups of rangers to help maintain its infrastructure. These loosely organized groups of individuals operate under the banner of the Sun Patrol, an odd company of rangers that all devote themselves towards maintaining sunglass gardens, as well as maintaining roads, keeping communications between communities up-to-date, assisting with logistical problems, and assisting with the daily affairs/disputes of the scattered remnants of humanity on this continent. The group is organized into scores of patrols, usually numbering between a dozen to thirty or forty individuals each. Each patrol is expected to have at least a witch, a medic, a scholar, a  quartermaster, and several support technicians—with other members usually consisting of assistants, trainees (under the guide of one of the rangers), or family members and friends.

These patrols were the result of large, cooperative contracts among several large worker associations that pledged their efforts towards helping communities in need. Shortly after the sun patrols were established by groups such as the Magic Workers Union, the Autonomous Pacific University Association, the Mobile Community Clinic, and the Sunglass Technicians Union, the dispersed communities began to receive different types of support from this ranger company. Solar sunglass farms were maintained and built. They were also able to assist with agriculture and manufacturing, they were able to assist communities resolve internal issues and they were able to assist communities with healing—be it physically, mentally, emotionally, or otherwise. Sometimes the healing comes from being fed, from listening to music, from celebration, from catharsis, from understanding.

The life cycle of a given sun patrol varies—sometimes a stable core of members work and travel with each other for around a year, sometimes you’ll find the same handful of members with a number of years of experience working with one another for a long time. This cycle varies given what the sun patrol was initially tasked with, and sometimes it is as short and simple as committing some repairs and community check-ins on a work trip that would finish in maybe half a year. If a group feels like their work isn’t finished, it is not uncommon for groups to be active in the field for years, given that the members are comfortable and close with one another. With longer missions, the sun patrols are almost always fully integrated into a new community by the time they feel their assignment is close to being finished. It is not uncommon for patrols to sometimes bring their families and loved ones with them, especially when on long deployments.

Sun patrols vary in size. Smaller groups tend to number around a dozen members, while the much larger groups number around 1-2 scores of rangers. You’ll always be able to find a witch, a medic, several support technicians, an academic, a quartermaster, and some trainees in any given patrol assignment. Sometimes, trainees are recruited for the work assignment that the group is tasked with—these individuals work under the wing of one of the rangers, reviewing and honing the skills they’ve learned for their career in a very practical sense. Trainees tend to be workers who just completed training programs, certification projects, or graduated from their respective fields, but lack much real-world application of their education/training.

The rangers take a lot of inspiration and spirit from the founding worker associations that came together to form these patrols. The administration of the sun patrols are democratically and collaboratively managed by representatives and workers from the MWU, the APUA, the MCC, and the STU (in collaboration with several community unions). Some fields find the job of an MST exhausting, others claim the job with an air of dignity and honor—some fields have a waiting list to be sponsored by their workplace to take on a job as an MST, while others run a randomized lottery to make it fair.

This reminds me of the old tv series ARK II 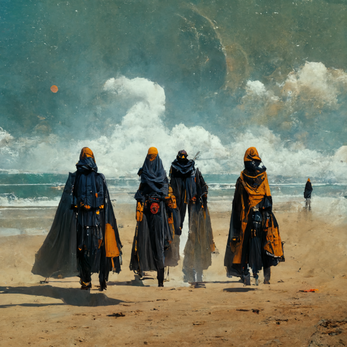 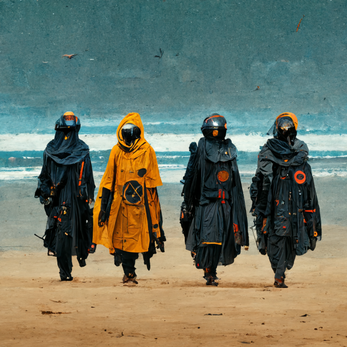 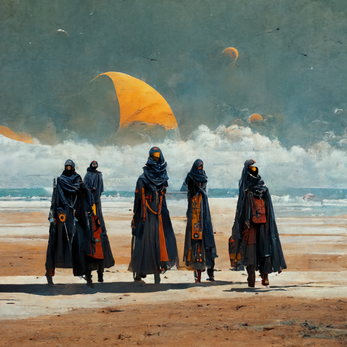 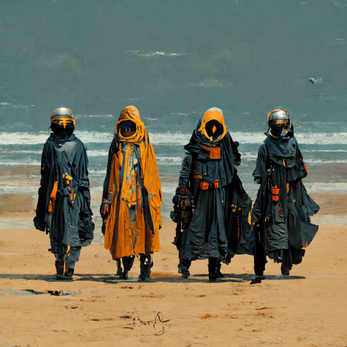